We propose to use Trypanosomatidae (prototypes: African trypanosomes Trypanosoma brucei, T. congolense, T. vivax and Leishmania donovani) as model organisms to investigate the dialogue between the parasite and its hosts.

Our main objectives are to:

Parasites can be controlled in two ways:

Moreover, resistance and tolerance to infection can be influenced by drug treatment of the host as well as by interaction between the host and the vector transmitting the pathogen. In this context, the objectives of the present proposal (summarised in the figure below) are: 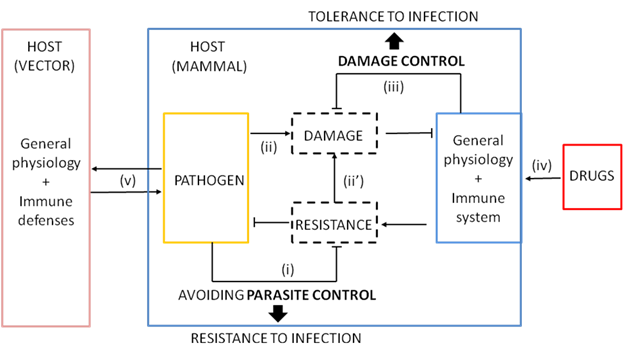 i. To study how African trypanosomes counteract the capacity of the (insect and mammalian) host to eliminate the pathogen (called resistance to infection) (i)
ii. To investigate how parasite- and vector- derived molecules cause mammalian host (non-immune and immune mediated) tissue damage (ii), and what is the contribution of resistance of the host to tissue damage (ii’)
iii. to address how the host in turn controls the pathogen elicited tissue pathogenicity resulting in tolerance of the host to infection (iii).

In addition, we will investigate:

The different partners of the TRIT-network have a large and complementary expertise in parasite and host biology that will be exploited in a collaborative way in different workpackages.

WP 1: How do parasites adapt to immune and drug pressure in their host?

The ULB will detail how trypanosome species that infect humans (T. brucei gambiense) resist to killing by the trypanolytic factor ApoL1. Also, ULB and VUB will dissect the mechanism by which ApoL1 enters trypanosomes independently from the haptoglobin-hemoglobin receptor (termed TLF2 uptake). The ULB, ITG-1 and LMUM groups will unravel the signalling/differentiation activity occurring during the development of trypanosomes in the mammalian hosts. A particular attention will be devoted to the characterization of the endocytic machinery. The ITG-1 and LMUM will focus on metabolic adaptations of trypanosomes to cope with oxidative stress and nutrient availability at different developmental stages in the tsetse fly. The ITG-2 in concert with ULB and LMUM will aim to characterize the adaptation to oxidative stress behind the higher in vivo survival skills of antimonial-resistant versus antimonial-sensitive Leishmania donovani in natural (drug-free) conditions.

WP 2: How do parasite- and vector- derived molecules modulate the (patho)physiology of the host?

The VUB will assess how enzymes released by trypanosomes (ex sialidases) can damage host immune cells and, in collaboration with IEM, how trypanosome elicited inflammation contributes to anemia of chronic disease. The VUB, ITG-1 and IEM will investigate how B-cell destruction is triggered by parasites (transmitted by needle or by tsetse infected flies), which intracellular signal cascades leads to this immunopathogenic damage and their consequences for vaccination. The ITG-1 and ITG-2 will investigate how trypanosome infection modifies the tsetse fly salivary gland environment. In addition, in collaboration with the VUB, ITG-1 will detail how immune-active components of the saliva from the insect vector (identified by ITG-1) influence the development of the parasite and the innate immune response of the mammalian host at the biting site.

The ULB will study how immunomodulatory molecules from trypanosomes already identified by the network influence resistance and tolerance to infection, and in collaboration with the VUB and LMUM will aim to unravel how these molecules influence the arginine metabolism as well as the signalling pathway (cAMP, autophagy) involved in inflammatory/anti-inflammatory immune response (early induction/inhibition of IL-10, TNF, …). The capacity of ApoLs to modulate myeloid cell activation and hereby inflammation will be addressed by the ULB. In this respect original transgenic mice (ApoL KO or ApoL1 expressor) will be analyzed. The VUB will identify mechanisms by which the anti-trypanosome immune response, in particular the response mediated by distinct myeloid cell subpopulations identified in the previous P6/15 project (including “tissue-resident” and “tissue-recruited subpopulation), contribute to hepatic and brain inflammation, as well as to anemia of chronic disease. This research will benefit from the expertise of IEM in relevant murine models of human pathologies in lung inflammation, host response to infection and neuropathology. Of note, the VUB has identified a potential marker for Kuppfer cells that is currently used to generate transgenic (knock-in) mice allowing tracking and ablating this selected myeloid cell population to evaluate their role in liver injury caused by trypanosome infection. Moreover, we will take advantage of the unique capacity of ITG-1 to infect mice with trypanosome infected tsetse flies to evaluate the contribution of distinct myeloid cell subpopulations to tolerance in a more natural setting. Furthermore, Nanobodies®, camelid-derived single-domain antibodies originally identified in VUB and proved as valuable tools to target inflammatory cells in vivo will be produced as tools to test in collaboration with ULB and IEM the activity of selected molecules in vivo/in vitro, to trace expressing cells through microscopy or in vivo imaging, etc. The ITG-2, in collaboration with the VUB, will study the host response upon natural L. donovani strains with differential in vivo survival skills, aiming to identify host factors essential for control of these respective clinical lines.